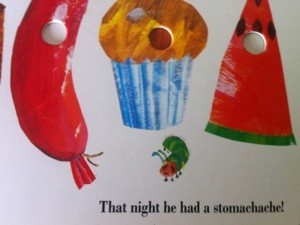 The Hungry Caterpillar has sold the equivalent of one copy a minute since it was released 46 years (yes, FORTY SIX!) years ago. This means the lesser-used US spelling of stomach ache has remained unchanged for nearly half a century and appears in 30 million copies worldwide. Though ‘stomachache’ might seem logical after ‘earache’, ‘backache’, ‘headache’ – it’s more than a mouthful, hard on the eyes, and, frankly, rather hard to digest.